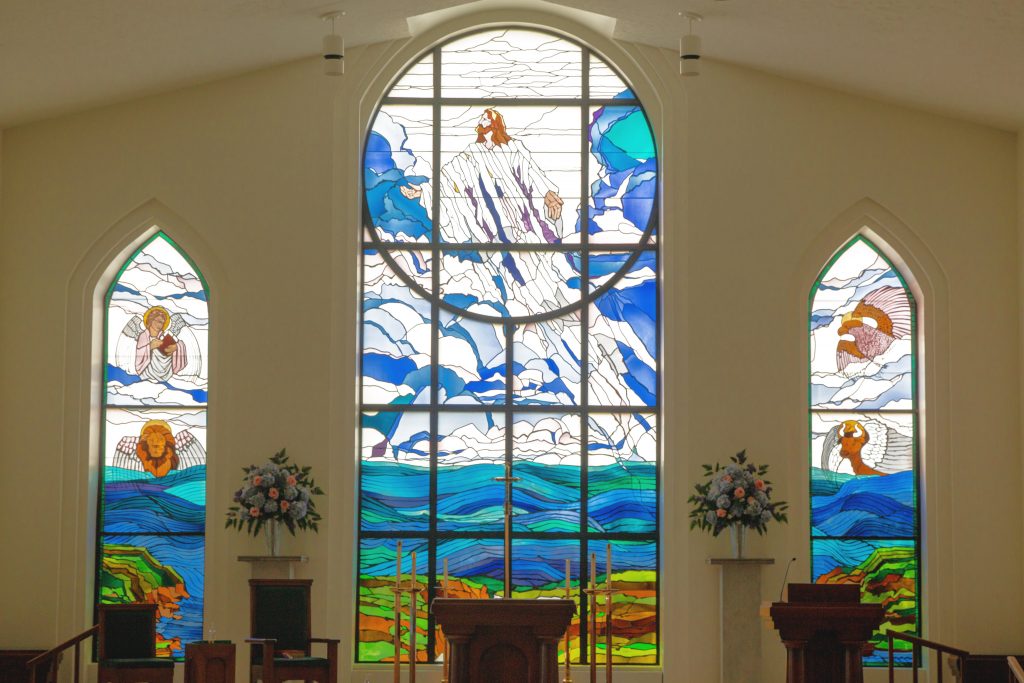 The glass used in each of our stained glass windows is antique, handblown glass imported from Lambert Glass Company in Germany. The term “antique” refers not to the age of the glass used, but to the method of making the window-glass.

Antique glass arrives in wooden crates in sheets which measure about 24″x36″. The sheet is made by dipping a long tube into molten glass and collecting a lump on the end. This lump is formed into a bubble by blowing down the tube. The bubble is then elongated and the ends are removed, forming a hollow cylinder.

While it is still hot, the cylinder is cut down one side and the glass is allowed to relax on a flat stone. In settling, the underside of the glass becomes relatively flat, including any irregularities that may be present in the surface of the stone. The upper surface of the glass cools and hardens at different rates, causing the glass to vary in thickness, making interesting variations in the color when light rays reflect off its surface. The glass is manufactured in various colors. These colors are produced by adding different metallic oxides into the molten glass. Red glass is more expensive, for example, because the oxide used to make the glass red is gold.

The first recorded reference to glass and its use in windows was written in A.D 442 by St. Jerome.

The Church has used symbols to represent writings and teachings from its beginning. These symbols were a necessity when the masses of people could not read. Some of our oldest church symbols – the dove, the fish, the lyre, the ship, and the anchor – were found in the catacombs and the second-century writings of St. Clement.

The Ascending of Christ

This large central window incorporates our original Rose window and depicts the Ascension of Our Lord. At his feet are the baptismal waters which run through the bottom of each of the windows. Christ is ascending through the clouds and upward, giving the window and space a feeling of light and height and grace. The window measures 23′ by 10 1/2′ and was the first window to be designed. At certain times of the year in the late afternoon and early evening when there is a red sunset, the angle of the sun and the colors in the sky cause varying changes in the color and light refraction. 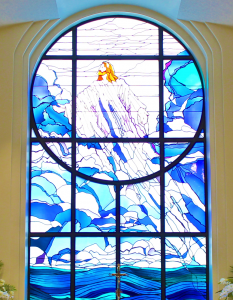 Since the 2nd century, these symbols have been paired with each of the evangelists, according to the passage near the start of his Gospel.  One reference for these symbols is found in the first chapter of Ezekiel in the Old Testament. These four symbols helped people relate the Gospels to the evangelists, to remember how each Gospel started, and what was written. To understand the significance of these symbols, we must remember that these were visual identifications for the writings that were handed down in the oral tradition.

Ezekiel was a major prophet whose expressive style of writing achieved the historical significance of helping his people retain their religious heritage. His writings endeavored to explain the religious basis for their exile and offered them hope for a restored nation.

Another reference to the winged creatures can be found in the New Testament in the 4th chapter of the book of Revelation.

Because Matthew’s Gospel begins with the genealogy of Jesus…”the son of David, the son of Abraham”…he is represented as a winged man. These symbols helped identify the Gospels in their oral tradition for the masses of people who did not know how to read. 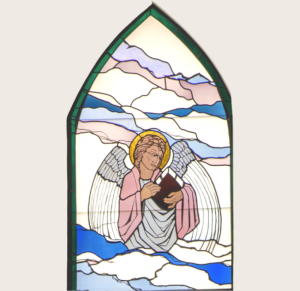 St. Mark’s lion corresponds to the roar of the “voice of one crying out int he wilderness.” The lion was an animal that could be found in the dry wilderness of the desert. 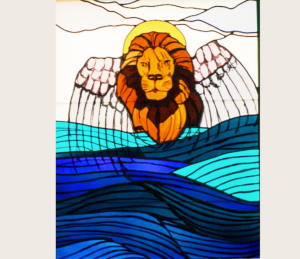 A winged ox is used to represent St. Luke because his Gospel begins with a sacrifice of the priest Zechariah in the Temple. The ox was a sacrificial animal. 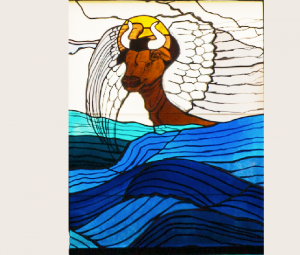 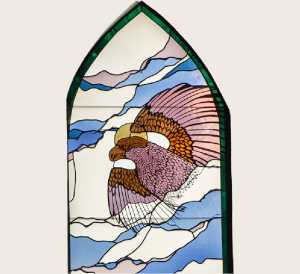 The waters of Baptism…ours, and those before us…and those who are to come. These waters flow through each of us, and through our lives, as we live the sacraments of our faith. From the baptismal font to our altar and through each of our windows, our baptism is symbolized so that we are all encompassed in the mystery, reverence, and wonder of this blessed sacrament.

The Baptism of Jesus is referred to in each of the four Gospels as the first testimony of John the Baptist. 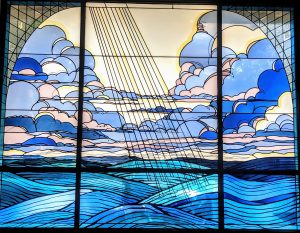 The rays from the nimbus (halo) of the dove extend outward over the entire window symbolizing the power of the Holy Spirit; the circle symbolizes eternity; the triangle is a traditional symbol for the Trinty (Father, Son, & Holy Spirit).

The yellow background glass for this window was tinted and fired at the studio in order to get this particular shade of yellow opaque glass. 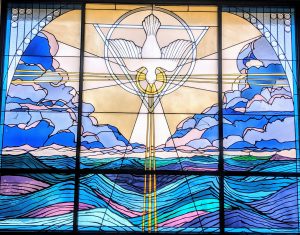 Wheat shown with grapes on the vine is a traditional symbol for the Eucharist. This window is a combination of the traditional stained-glass technique with the added use of sandblasting, drawing, and painting on the glass. While using patterns traced from the original full-sized drawings in order to ensure accurate from size, this window employed more freehand drawing with work done by the artist directly on the glass. This particular window was chosen to be exhibited in the stained glass section of Louisville’s 1999 Festival of Faith. 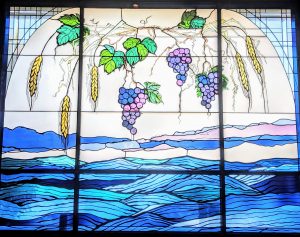 In this window, there are primarily purples and royal blues, with some gray and yellow-tinted glass. The white used for the dove differs from the other whites in the other windows. This window, one of the more challenging to construct, has many small pieces of glass and was cut by the master craftsman of the studio.

The dove – a symbol here for peace, purity, meekness, humility – is holding an olive branch, also symbolic of peace. A dove with an olive branch symbolizes peace and forgiveness. A dove with rays of glory (the lines through the clouds and into the water) symbolizes spiritual blessings. (Notice the absence of the nimbus (halo)). 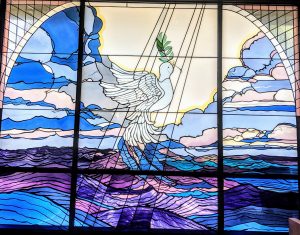 The Anointing of the Sick

The use of holy oils – in the blessing and consecration of persons and things – is found throughout the Old Testament; kings, priests, and prophets were anointed with oil. In the Church, holy oils have been used from the earliest times in the rite of the sacraments of Baptism, Confirmation, Holy Orders, and Anointing of the Sick. In the Epistle of St. James in the New Testament, he addresses the sacrament of the Anointing of the Sick. “Is anyone among you sick? Let them bring in the priests of the Church, and let them pray over them, anointing him with oil in the name of the Lord. And the prayer of faith will save the sick man, and the Lord will raise him up, and if he is in sin, they shall be forgiven him.” (5:14-15) The symbols used in this window are those used by the priest during the anointing of the informed.

The glass used for the oil in the decanter was chosen for its texture and its clarity. Some of the glass in the window is painted, some tinted. The leaves are sandblasted, painted, and fired in a kiln. Sandblasting the opaque glass allows the light to shine through, making it translucent. 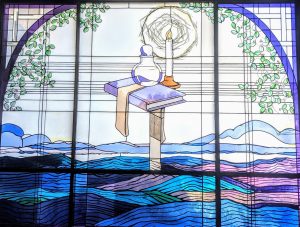 A special glass was used for the center of the cross in this symbol. In natural light this glass appears blue-tinted; in artificial light, amber-tinted. It is a clear glass, but light refraction is distorted. This glass was hand-beveled, which takes hours of patient grinding, smoothing, and polishing. The roses in this window were sandblasted and painted. Each piece of glass in all the windows that have been painted must be fired in a kiln causing the paint to fuse with the glass and become part of the glass. The painted areas are therefore permanent and will last as long as thee glass.

The cathedrals in France and England, Germany, and Italy have glass windows dating from the 12th and 13th centuries. The process is the same today for making a stained glass window as it was then, made easier only by the invention of electricity. 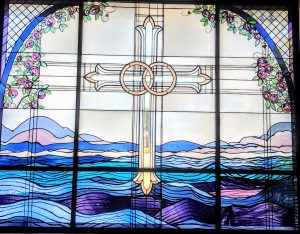 This window was the first one to be completely cut and the first to be constructed. The leaves were sandblasted, and then painted; the stole and chalice were painted by a studio-artist in order to show highlighting. The chalice with the Bible and the priest’s stole are traditional symbols for this sacrament and are usually shown with the stole folded and draped across a closed Bible with the chalice placed on the Book. Of the eight side windows this was a favorite of several of the studio artisans. 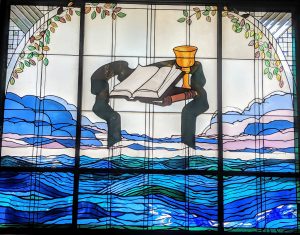 The Harp of King David

The window in our choir area helps us remember our Jewish heritage by depicting King David’s harp with the Star of David on its base. The story of King David, a descendent of Abraham, and therefore an ancestor of Christ, can be found in the first book of Kings in the Old Testament.

The harp in this window was painted in the same. manner as the background of our Confirmation window. 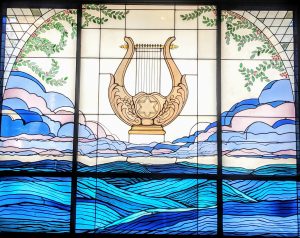